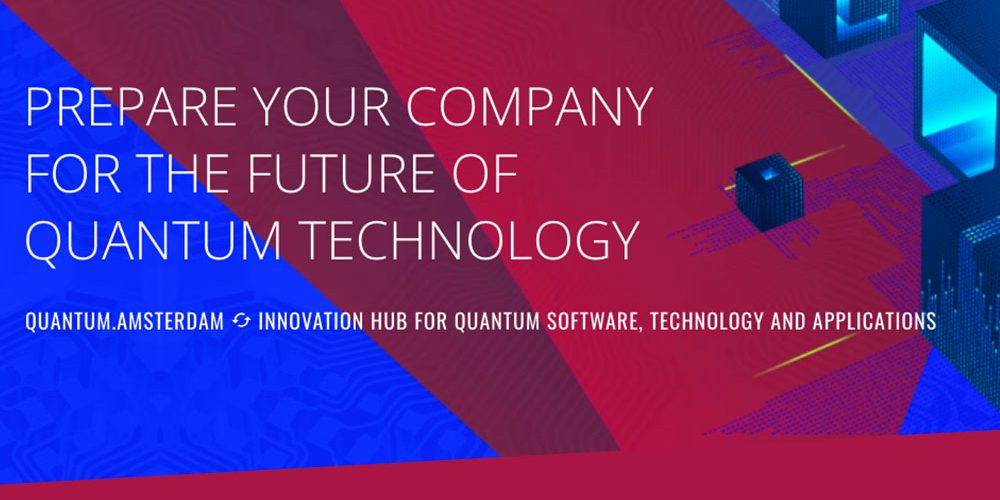 Quantum Delta NL, the public-private foundation that was launched in 2020 with the mandate to coordinate and execute the Netherland’s National Agenda for Quantum Technology (NAQT), has been awarded €615 million from the Dutch Ministry of Economic Affairs and Climate Policy to power the advancement of quantum technology. This gives a tremendous boost to quantum research and development in the Amsterdam ecosystem.

As one of the five innovation hubs of Quantum Delta NL, Quantum.Amsterdam acts as liaison to the national quantum activities as described in the NAQT and beyond. Its mission is to connect academia, industry and society in a quantum ecosystem in the Amsterdam region by facilitating knowledge exchange and innovation. As a network organisation, Quantum.Amsterdam has a strong backbone in knowledge partners such as the University of Amsterdam (UvA), Centrum Wiskunde & Informatica (CWI), Vrije Universiteit Amsterdam (VU) and the Amsterdam University of Applied Sciences. Its research base includes QuSoft, the research center for quantum software, and quantum labs at the UvA, which focus on hardware for quantum simulation, atomic clocks and quantum sensing applications.

“It is great to see that the field of quantum technologies has moved to this point in time where the Dutch government sees the economic benefit and feels the need to support the joined effort of quantum science and industry in a tremendous way”, says Harry Buhrman (Professor at University of Amsterdam, Group Leader Algorithms & Complexity CWI, Director QuSoft). Also professor Florian Schreck (University of Amsterdam) is glad to witness the Dutch government is investing in this revolutionary technology: “The Netherlands is strong in quantum research and has unique high-tech industry. This funding allows us to combine both strengths and thereby bring advances from fundamental research to society”.

The new funding, awarded by the National Growth Fund, will benefit many of the activities undertaken by Quantum.Amsterdam, such as quantum awareness programs for companies, a Talent and Learning Centre aimed at educating the quantum workforce of the future, and a program focusing on Ethical Legal and Social Aspects (ELSA) of quantum technologies. “It is fascinating to see how fundamental insights and progress in quantum physics enable new technologies with great promise for society. The Quantum Delta NL program will give a strong push to this development, by supporting research and development, transferring quantum technology to businesses and society, creating quantum awareness and educating a new generation of quantum scientists”, says Kareljan Schoutens (professor University of Amsterdam & director QuSoft).

QuSoft is the Dutch research center for quantum software with an excellent track record in quantum computing and quantum information. Its mission is to explore and develop uses of quantum computers and other quantum technologies at large, for the benefit of society. Moreover, it is the cornerstone of the Quantum.Amsterdam hub.

Centrum Wiskunde & Informatica (CWI) is the national research institute for mathematics and computer science in the Netherlands and part of NWO-I, the Institutes Organisation of NWO. The institute pioneered research in quantum algorithms since the mid 1990’s. CWI strongly contributes to Quantum.Amsterdam in this field through the Algorithms & Complexity research group (now part of QuSoft).

University of Amsterdam (UvA) hosts strong quantum physics and computer science research groups. Also, in addition to committed research groups, the university will invest in Quantum.Amsterdam and provide working space in which the scientists, engineers, and companies will work, meet, and cooperate.